Info regarding the species.

The difference between the subspecies are the distribution, colouration and also a bit in size.

Is the most nothern of the sub species. It is distributed from Rio Fuerte in the sonora dessert in the north, and dowh to the Mazatlan area in Sinaloa, where this subspecies are replaced by H.h. horridum.

In appereance it is a brownish lizard with a large number of small whitis yellow spots and patterns on the body, and very distinct bands on the tail.

is the mostly widely distributed subspecies from the Mazlatan area in Sinaloa and down to the Cintalapa peninsular in Chiapas, where H.h. alvarezi overlaps.

H. h. horridum is the subspecies represented in the most different types of natur and in the largest number of different altitudes, as it is found up to 1500 m above see level

In appereance this subspecies is a bit variable. The gound colouration varies from brownish to black, with a variable number of whitish spots, that are spread all over the body. It has not as much pattern as H.h. exasperatum, and the tail are not banded in the same way.

The english name is Mexican beaded lizard, and the spanish name is Escorpión or Alcaltetepón

replaces H.h. horridum in the Chiapas region in the north and are distributed all the way to the Rio Lagartero in the north western Guatamala.

This subspecies is a bit complicated to identify as it hatches with alot of yellow spots, and these disapers with the age. They will almost or completely be lacking tailbanding

The english name is Chiapan beaded lizard or Rio grijalva beaded lizard. In spanish it is called Lagarto Enchaquirado

This subspecies is the most rare, and least distributed one. It only lives in the Montagua valley in Guatamal, where it lives in tropical dry forrest. It is the largest of the subspecies, and should be able to acces one meter according to the litterature. There is not much info on this subspecies, as it is relatively new to science. It was first discovered in 1984, and discribed in 1986. It is very rare because of the destroying of its habitat, and is almost extinct. According to scientists the population in nature should bee less than 200 animals. This is the only heloderma on Cites list 1

On the picture you can see two subspecies of Horridum. The top animal is H. h. horridum and the animal below is H.h. Exasperatum 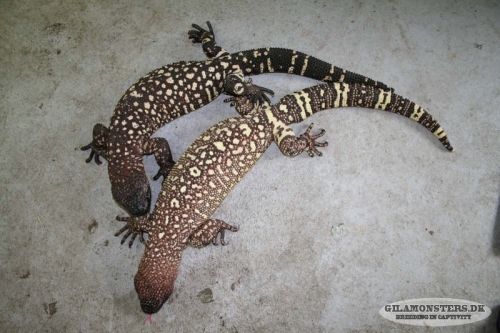