In the beginning of april I introduce the animals to each other. It is very important to keep an good eye on them, as some animals don´t work together and will start fightingt instead. I prefer to introduce the males to the femals terrarium, as the male will get more on his marks being in a new territory. He has to show of and mark the terrarium ect. This is all stimulating for the mating.

If the animals accept each other, the male will gently push the female with his head, and for the next weeks he will be at her side all the time. When the mating behavior starts, the male will place his head on the females, and will start to move it from side to side on top of hers, very fast. Then he will try to lift her tail with his hind limbs, and if she in not ready, she will run away from him. This will be repeated many times over the next weeks. The mating normally happens in may

Here is an example of a mating 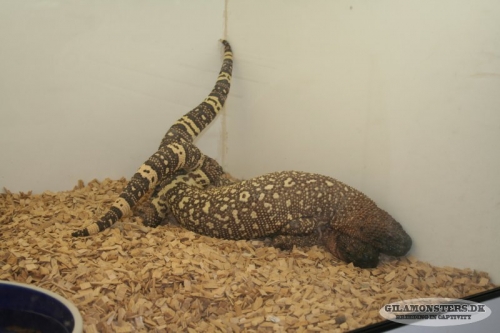