According to the last revision of the species, published in 2010, the two subspecies are now degradated to local morphs!

The difference between the two sub species is the colouration. H.s. suspectum is the  reticulated type, where as the H.s. cinctum is the banded type.

is the most common type which lives in the southeastern USA, more specific in Arizona and New Mexico, and all the way down to the northern part of Mexico in the Sonoran dessert, to the area around Rio fuerte in the northern Sinaloa dessert area.

it the northern of the two subspecies and lives in the northern Arizona, and in the most southern part of Utah and Nevada.

The name Gila is pronounced Hila, as it comes from spanish, and is named after rio gila where the first records of the lizard comes from

This species is reconized by being a compact plumb lizard with a massiv head. Max size is around 60 cm and a weight around 1 kg.

Gilamonsters are black as a basecolour, with pink or orange pattern. The pattern varies alot and can be all from small spots to wide bands. This depends on which subspecies the animals are.

Especially the lower jaw is well developed and massiv, as it is here the animal has its venomglands

On each foot there are 5 fingers with powerfull claws for digging. Halen er meget kompakt, og virker som et fedt depot for øglen.

The skin is beaded and from that the latin name Heloderma originates. Heloderma is combined of the two greek words Helos and Derma. Helos means head on a nail or a pin, and derma means skin. This is a quit suitable description of the skin of a heloderma.

In this picture you can se the two types. Cinctum to the left and suspectum to the right. 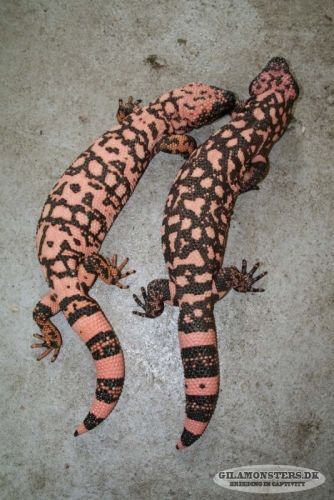